Stylish Stores
Step Inside Four Local Shops as Unique as the Products They Sell
By Margaret Zainey Roux, Photographed by Sara Essex

From a small, cozy shop on Webster Street, Jane Scott Hodges built an empire otherwise known as Leontine Linens. Revered by Hollywood celebrities, New York socialites and Southern belles alike, her heirloom-quality custom linens for the bed, bath and table have caused quite a craze. Boasting oversized insignias that purvey a distinctive Old World charm, these luxurious linens, embroidered in funky colors such as chartreuse and paprika, are anything but antiquated.

Established in 1996, Leontine Linens rapidly gained momentum with the acquisition of Kentucky-based linen company Eleanor Beard, and within a decade it had outgrown it’s original location. For her new showroom, Hodges envisioned a clean, crisp space that would both complement and contrast her highly embellished pieces, so she sought the guidance of local architect/designer Brian Bockman. Although she didn’t know Bockman personally, she was familiar with his work, and upon their first meeting she know he was the right man for the job. The two saw eye-to-eye on everything – most importantly on the atmosphere of the showroom.

“For centuries, gentlemen have had clubs where they can pour a drink, light up a cigar and socialize with friends, “ says Hodges. “I liked the idea of creating a similar environment reminiscent of the old Park Avenue salons where ladies could visit and relax.”

Bockman researched the design and décor of such salons and then drafted plans to re-create one with a more modern, lofty flair. By using unexpected materials, fresh colors and contemporary furnishings, placed in comfortable arrangements, he accomplished his goal. Old photographs of the Eleanor Beard salon in New York hang on the walls, providing a visual history of the company’s deep roots. From the ceiling dangles an otherwise uppity crystal chandelier painted lavender, Leontine Linens’ signature hue. Clean-lined tables by Knoll Studio offer a casual alternative to office desks, and plush sofas placed at the center of the showroom offer patrons an inviting place to peruse swatch books and samples with consultants. Bockman also designed creative vignettes, including headboards and shelving systems that display the linens in a “virtual home” setting so that customers can visualize how their linens will appear in a room. But it may be the lingering wall mural of the company’s stitch-motif logo that best connects the essence of showroom with the company’s motto, “Heritage Driven, Heirloom Destined.” The logo symbolizes the connection between old and new this is not only found in the showroom’s design but also lives in the very heart of Leontine Linens. 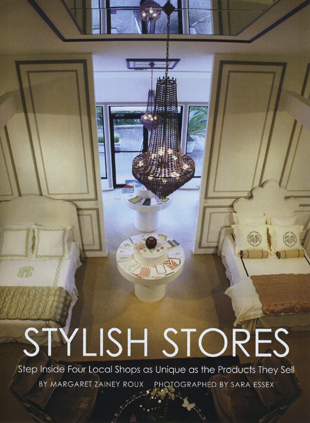 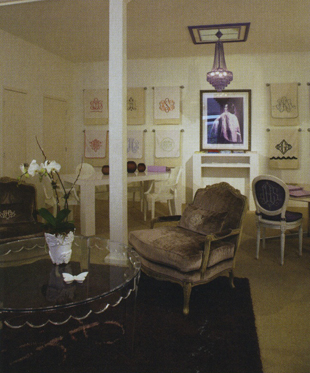 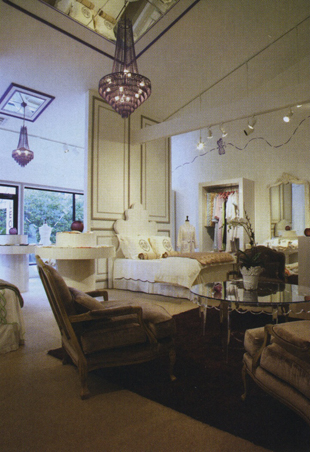